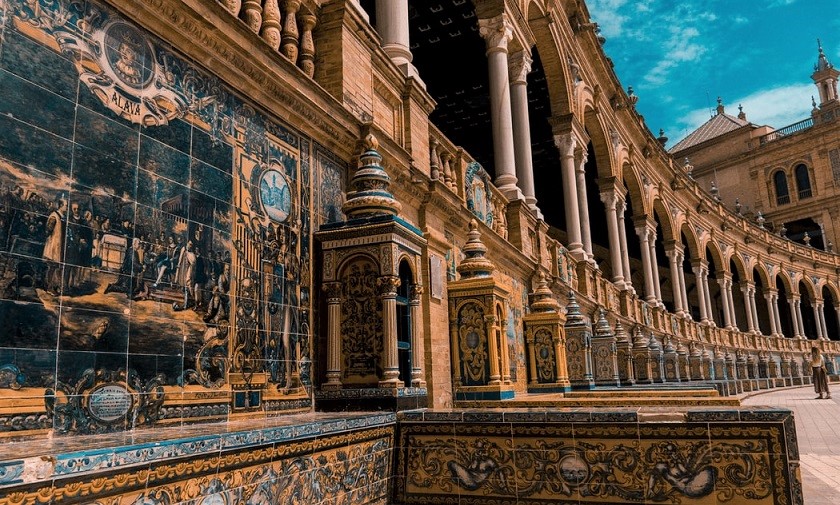 «Who does not see Seville, sees no wonder» is a famous Spanish motto that already tells us a lot about this city. Atmospheric, welcoming and steeped in history, Seville is a city that enchants from the first glance.

Home of flamenco and bullfighting, this city is considered by many to be one of the most beautiful not only in Andalusia, but in the entire Iberian Peninsula. Is it perhaps its elegance in reconciling old and new that makes it so fascinating?

To find out, all we have to do is walk around the city and lose ourselves in its narrow streets, following the azulejos, thecoloured tiles that decorate the streets and benches and lead the more curious to discover fascinating views.

If you have never been to Seville…

Seville has an artistic heritage of great value and every corner of the city is a treasure trove of history, intertwining different eras and styles. Anyone visiting the city should not miss the Cathedral and the Alcazar, Seville’s royal palace.

The Cathedral, one of the largest Gothic churches in the world built on the site of an existing mosque, is the symbol of Christianity. From the Giralda, the bell tower that used to be the minaret, you can enjoy a magnificent view of the whole city.

To admire such a marvel, the advice for less patient travellers is to book tickets online in advance and not find yourself queuing for hours due to the heavy influx of visitors.

The same applies to the Alcazar. Here, too, travellers spend hours visiting the Royal Palace built during the Arabian rule. In addition to the palace, the beautiful gardens, inhabited by elegant peacocks and full of orange trees, are an irresistible attraction for visitors.

If you love colours, you can’t miss another must-see attraction in Seville, which is full of them. We’re talking about the enormous and colourful crescent of azulejos and Seville’s charming Plaza de España. This immense square is one of the symbols of the city.

Another famous square is the Plazade Toros, which in addition to hosting bullfights, not loved by everyone, also contains the Museo de la Real Maestranza, where you can see clothes, costumes, photos and paintings of bullfighters, kings and typical scenes from Spanish tradition and history.

Seville between authenticity and taste

But if you want to know the true and authentic identity of this city, you have to move a little away from the centre and visit one of the places that best represents it. This is Triana, a small neighbourhood located on the banks of the Guadalquivir River, which was only connected to the rest of the city in 1852. Pottery factories, azulejos, the Mercado de Triana, el Paseo de arte, the neighbourhood bars and much more will guide your walk through this original neighbourhood, also known as the gypsy quarter.

But in addition to pleasure for the eyes, don’t you think it’s time eat something?

The smells of the Mercado de Triana are in the air, and it’s time for a taste of tapas. Although small, the market is full of stalls offering a variety of Iberian specialities, including jamon iberico or pata negra, both typical Spanish hams, or a freshly cooked potato tortilla, vegetables, fish and octopus.

In addition to the market, for a local experience, we recommend lunch in one of Seville’s characteristic bodegas.

First and foremost, located in the historic centre, El Rinconcillo is the oldest bodega in Seville since 1670, and if you have a little patience you can also taste typical dishes here for 100% Spanish comida.

If, on the other hand, you are strolling through the Santa Cruz neighbourhood, another place that will catch your eye is surely ‘Las Teresas’, a chaotic and picturesque space where people usually have an aperitif first and then, late in the evening, dinner, according to Spanish timetables.

In short, it’s clear: there is no shortage of places to eat or drink a cervecita in Seville.

But Seville’s sights don’t just include memories of the past. The city also offers avant-garde attractions, one of the most recent of which is the Metropol Parasol, a large perforated “umbrella” that provides shade to the Plaza de la Encarnacion, recently built and already one of the city’s symbols, as well as being the largest wooden structure in the world.

Here the main attraction is the mirador, a wooden walkway in the shape of a snake that serves as a viewing terrace, offering a wonderful view of the city. For Sevillians, the Metropol Parasol is a popular meeting place, usually called Las Setas (the mushrooms), because the shape of this structure somewhat resembles a bunch of mushrooms.